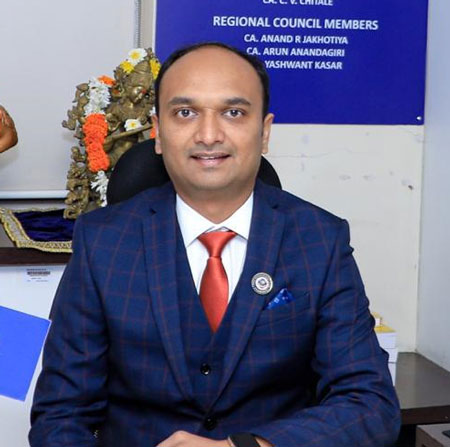 “A warrior never worries about his fear.” a quote perfectly suitable for our brave Students appearing for exams in this delicate situation. I am happy to share, the CA November exams are being conducted in Pune and across India. All the norms of social distancing and safety are being followed in a proper manner in all the centres.

September month is usually a most exhilarating month for Chartered Accountants. But this year being different, extensions of Tax Audit and Income Tax Returns are in December, hence the year will be ending on a hectic note.

Interaction with the Past Chairmen, MCM, Past RCMs, CCMs of Pune branch of ICAI, and Pune WICASA was also organised with WIRC office Bearers. I am glad to inform all you that, New website of Pune ICAI was launched during the Sub Regional Conference.

As IT plays an important role in the life of a CA, virtual program on “Advance Excel” was conducted for the members to help them enhance their skills. Along this virtual CPE meeting on “Masterclass on Accounting Standards” for discussing and explaining the changes in different Accounting Standards and a meeting on Service Cell by Addl. CST office took place.

On the occasion of Diwali in the month of November Satyanarayan Pooja took place on the Pune branch office to let go of the evil over the good and to bring more light and prosperity and as a helping hand Pune ICAI distributed essential products to needy people.

As month of December, we are eagerly looking for the National Conference for CA Students which will be organised by Board of Studies and hosted by Pune ICAI, the dates for the same will be announced shortly.

I would like to conclude with Martin Luther King Jr. quote “The ultimate measure of man is not where he stands in movement of comfort, but where he stands at times of challenge”, so let us stay together and fight this pandemic together.

Last but not the least wishing you all a Merry Christmas and a Happy New Year.